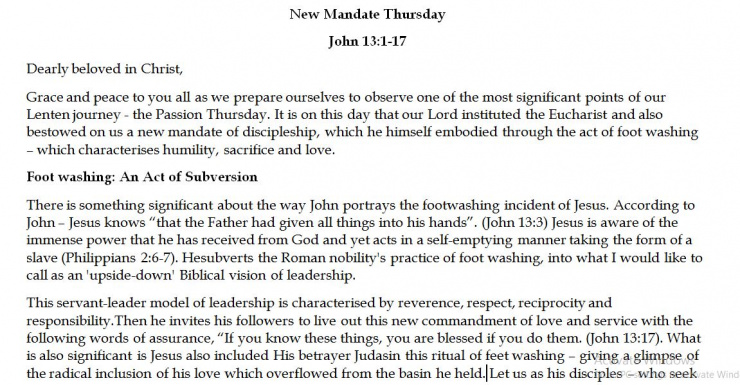 Grace and peace to you all as we prepare ourselves to observe one of the most significant points of our Lenten journey – the Passion Thursday. It is on this day that our Lord instituted the Eucharist and also bestowed on us a new mandate of discipleship, which he himself embodied through the act of foot washing – which characterises humility, sacrifice and love.

Foot washing: An Act of Subversion

There is something significant about the way John portrays the footwashing incident of Jesus. According to John – Jesus knows “that the Father had given all things into his hands”. (John 13:3) Jesus is aware of the immense power that he has received from God and yet acts in a self-emptying manner taking the form of a slave (Philippians 2:6-7). Hesubverts the Roman nobility’s practice of foot washing, into what I would like to call as an ‘upside-down’ Biblical vision of leadership.

This servant-leader model of leadership is characterised by reverence, respect, reciprocity and responsibility.Then he invites his followers to live out this new commandment of love and service with the following words of assurance, “If you know these things, you are blessed if you do them. (John 13:17). What is also significant is Jesus also included His betrayer Judasin this ritual of feet washing – giving a glimpse of the radical inclusion of his love which overflowed from the basin he held. Let us as his disciples – who seek to embody his life and love in our very own lives -adopt  suchhumility and self-emptying, so that we can exhibit love to our friends and enemies alike.

The night before His dying on the Cross, Jesus went to the Mount of Olives, near Jerusalem. He prayed in the Gethsemane Garden. ‘Gethsemane’ means, place of the olive press(மரசெக்கு). You can find a lot of such olive presses in the village of Capernaum, used for olive oil extraction.

Jesus’s act of prayer in the garden of Gethsemanecan be perfectly capturedin the symbol of the olive press. He is there crushed by the prospect of his impending suffering and pain. In that crushing agony as He prayed, His sweat appeared like drops of blood’ (Luke22:44). Jesus might have needed the comfort of His Father at this hour of ‘pressing’ suffering. He knew about what He was about to face;arrest and death. In this moment of vulnerability he asked His closest friends to stay and pray. But alas, Peter, James and John fell asleep. HE BORE THE PAIN ALONE. His suffering was solitary suffering. Despite being solitary suffering, Christ’s suffering was a suffering of solidarity with all those suffering people, whose pain he bore on the cross. He suffered in solidarity with all of us, so that death and suffering will not have the last say and their power will be vanquished on the cross of Christ. It is this solidarity which grants us time and again the assurance that God will never leave or forsake us and the world at large, even at times when we seem to be staring at looming death and destruction.

Invited to the Last Supper: To Become Part of His Body

Jesus invites His disciples to come together to the table for the Lord’s Supper, to remember the story of God’s liberation of slaves during the Passover. However, in that act of remembrance he initiated – a new community of fellowship and service. His disciples were called to become a community which replicates Christ’s humility and service ‘in remembrance’ of Christ. Every time we gather at the Eucharist – we remind ourselves that our identity as church is about becoming the body of Christ here and now. It invites us again to focus on Jesus Christ, his life and witness, and reproduce in our ordinary lives the extraordinary life of Christ – the bread and blood of life – who empowers us in our discipleship.

My dear believers in Christ, during this Thursday as we hear the scriptures saying:  ‘Do this in remembrance of me'(1Cor. 11:24), it is a call to remind ourselves of God’s solidarity with even in the midst of suffering and death. It is also a call to service – to fulfil the mandate of Jesus Christ, who gave us the greatest commandment to love one another even as he loved us to the point of death. May this awareness of God’s solidarity, and this awakening to God’s service, embolden us during this time of uncertainty caused by the CORVID-19. May Christ be our light and hope and may he empower us to be sources of light and hope to those around us. May He shield, heal and guard us all, now and always.